Several years ago, I received some photos and newspaper clippings of the William H. Harper family from relatives at the Harper-Hunt family reunion, as this line of the family no longer had any living descendants. William H. Harper was the oldest son of John K. and Eliza J. (Hunt) Harper. As I perused the materials given to me, a tragic tale unfolded.

Bessie Harper was born 10 July 1893[1] near Woodbine, Iowa, the daughter of William H. Harper and Ricca Nelk.  She was my maternal grandmother’s (Amy Harper Taylor) cousin.  Bessie Harper became the bride of Herman Slayback on Wednesday, December 19, 1917 at 12 o’clock at the home of her parents, Willie and Ricca Harper, with about 150 guests in attendance.  Her bridal gown was pale blue silk with a veil of white net held in place by lilies of the valley.  She was attended by her cousin, Creola Burch, who wore white silk.  Both young ladies carried white roses.  Bennie Grinnell acted as Herman’s groomsman.  A reception was held the following evening at the home of the groom’s mother, Mrs. D. W. Dunkle[2]. 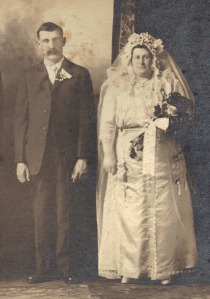 Within the next few months, Bessie and Herman made their home in his hometown of Bloomfield, Nebraska.  Less than ten months after their wedding, the newlyweds would both become victims of one of history’s darkest moments – the Influenza Epidemic of 1918.

Herman was the first to succumb.  He passed away in Bloomfield on October 15, 1918 at the age of 29.  While his remains were brought to Woodbine, Iowa for burial, Bessie was left at home seriously ill with influenza and pneumonia, with her mother at her side.  Bessie died October 18, three days after the death of her husband, at the age of 25 years.  She is buried beside her husband in the Woodbine cemetery[3] 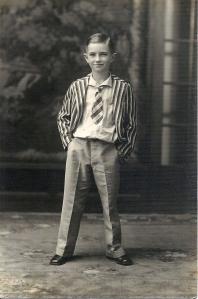 I was playing around with the Omaha World Herald archives at the Omaha Public Library website yesterday.  Lo and behold I found several articles on my father-in-law, Gail Garnett!  There were quite a few snippets about his “track star” days at Omaha Technical High School in 1940 and 1941.  However, this one actually has a picture of him! OWHJuly1941b: (Omaha World-Herald, 6 Jul 1941, p. 3-B, Col. 1).

What great finds!  I’ll have to see if I can obtain copies of the photos from the OWH archives.

Note: These articles are copyrighted by NewsBank and/or the American Antiquarian Society. 2004